Since 2019, refugees who are housed in UNHCR camps in Niger have on several occasions protested against their precarious living conditions and against being trapped in camps in Niger, their unanswered asylum requests and being prevented from going to other countries to live in safety.

On Thursday, 8th of October 2020, another unbearable situation arose in the UNHCR camp in Hamdallaye, near Niamey, the capital of Niger: For three days, the refugees in Hamdallaye were without food! The people reacted with a peaceful protest, showing placards calling for justice for the refugees in Niger. 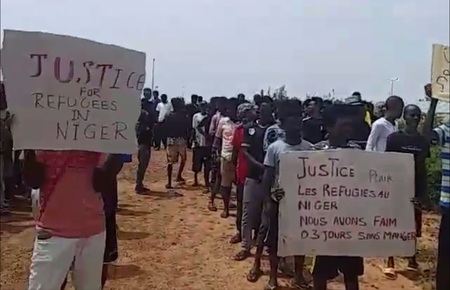 Video of Hamdallaye refugee protest on 8th of October

Alarme Phone Sahara stands in solidarity with the refugee protest in the UNHCR camp in Hamdallaye and condemns the obvious mismanagement that is taking place on the ground. It is unjustifiable that an international organization such as the UNHCR cannot even ensure the satisfaction of basic human needs, such as access to food, for the vulnerable people living under its administration.

In this sense, Alarme Phone Sahara urgently calls for the full respect of the rights of migrants and refugees in accordance with international treaties and conventions!

Alarme Phone Sahara invites you to send a large number of protest letters to Alessandra Morelli, UNHCR representative in Niger:

Due to your function as the representative of the UNHCR in Niger, we write to you because of an urgent problem: On 8th of October 2020, we have been informed that in the UNHCR refugee camp at Hamdallaye near Niamey, the refugees accomodated in this camp have not received any food for three days - allegedly because of issues with the food contractor in Niamey due to payment problems. The refugees reacted to this unbearable and painful situation with a peaceful protest demanding justice for refugees in Niger.

We want to point out: It is not justifiable at all that a high-ranking international organisation like the UNHCR does not even manage to fulfill basic human needs, like access to food, for vulnerable persons living under its administration!

We urgently demand from the UNHCR to provide for an urgent and immediate solution to insure that the people staying in the Hamdallaye refugee camp and all other camps run by the UNHCR in Niger will have propper access to sufficient food, water, clothing and medical care! Fulfilling basic human needs for refugees is the least that the UNHCR must insure in any case!

Dear Mrs Morelli, we also want to point out: This is not the first time refugees living in UNHCR camps in Niger rose up in protest against their unsupportable situation. On 20th of June 2019, refugees in Hamdallaye protested at the event for the World Refugee Day. In July 2019, minor refugees in Agadez left their camp and started marching into the desert to head for the border of Libya. From 16th of December 2019 till 4th of January 2020, refugees in Agadez carried out a peaceful sit-in protest in front of the local UNHCR office, which was finally ended by police repression, resulting in the Agadez refugee camp being set on fire. And there were more refugee protests that took place in different locations in Niger. During all these occasions, people protested, on the one hand, against unsupportable living conditions and, on the other hand, against being blocked in Niger waiting in vain for any result in their asylum cases. They demanded a solution for their cases and also the possibility to move on or to be resettled to another country where they could live in safety and humane conditions.

Dear Mrs. Morelli, it is high time for the UNHCR to take all this into account and to search for real solutions for all the refugees staying in the camps in Niger! Otherwise, you are risking a situation that will once again push more people to risk and maybe lose their lives on the desert routes and on the Mediterranean passage!

We urgently call for the full respect of the rights of migrants and refugees in accordance with international treaties and conventions!

Thank You for Your understanding,