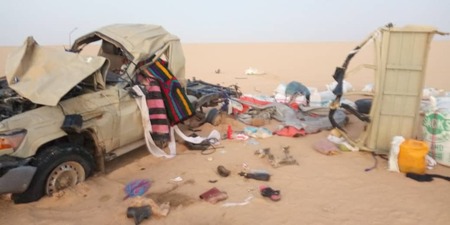 As Alarme Phone Sahara did not have the means to carry out a rescue mission, the alert person Laouel Taher informed the office of Doctors without Borders (MSF) in Dirkou to go to the scene of the accident and provide the necessary assistance. Eventually, the two injured people were evacuated to Dirkou by a military ambulance.

Alarme Phone Sahara deplores the tragic death of the four people in the desert, whose names are not yet known to APS, and wishes a quick recovery to the two injured people.

For Alarme Phone Sahara, this case shows the need to set up effective rescue structures to secure people in distress in the desert, to provide reachable emergency numbers and to provide people crossing the desert with satellite phones.

Furthermore, Alarme Phone Sahara reminds that it is precisely the migration control measures put in place at the request of European states that have increased the risk of death of travellers on trans-Saharan routes: If travel routes are monitored by patrols and checkpoints, drivers with migrant passengers will choose even more remote and dangerous routes. In addition, nobody would be forced to risk their life on the desert roads if there were free movement without passport and visa differences for African people within Africa and between Africa and Europe.

APS (Alarme Phone Sahara) also notes an ambivalent role of the Nigerien military concerning the safety of desert travellers: On the one hand, it is the military that acts under orders to intercept cars and convoys with migrants and refugees passing northwards. On the other hand, in the absence of independent civilian structures equipped for rescue operations, it is often unavoidable to call on the military in case of emergency in the Niger desert. To resolve this dilemma, the programme of repressive migration control must be abandoned in favour of a programme of human security and freedom of movement for all people moving between the Sahel and Sahara countries.

May those who died in the desert rest in peace!

May the wounded recover!

For human security and freedom of movement for all people on the move in the Sahel-Saharan region!

Posted on Aug 30 | Tagged Dirkou, Niger, détresse, emergency, cas de décès, cases of death, accident, sauvetage, and rescue | visited: 7280
Posts
Latest news Analyses & statements Activities of APS
Latest posts
2022-12-04 Niger end 2022: Humanitarian emergency in the face of mass deportations and inaccessibility to IOM services (News) 2022-10-21 October 2022: Deportations from Algeria to Niger continue - assistance to deportees by Alarme Phone Sahara's tricycle (Activity, News) 2022-09-19 More mass deportations from Algeria to Niger in August and September 2022 (News) 2022-09-19 "It's too hard, we want to go back": Senegalese in Niger denounce the difficult wait for their repatriation (Statements, News) 2022-09-22 Niger: Senegalese migrants take to the streets to march from Agadez to Niamey and demand their return to Senegal (News) 2022-08-28 Niger: Protests of migrants in IOM camps in Agadez and Arlit (News) 2022-08-27 IOM in Niger: Criticism of serious shortcomings in the care of people stranded in Niger (News, Statements)