On 6th of February 2014, more than 200 migrants tried to enter the city of Ceuta, a Spanish enclave, from Moroccan territory through the beach of Tarajal. The Spanish Guardia Civil fired smoke cartridges and rubber bullets at the people in the water to prevent them from entering Spanish territory. Fifteen migrants were killed on the Spanish side, dozens disappeared and others died on Moroccan territory. Since then, 6th of February has been declared a day of commemoration for the migrant people killed and disappeared on 6th of February 2014 between Tarajal and Ceuta and beyond for all migrants and refugees killed and missing in the seas, deserts, borders and migration routes. On 6th of February 2020, a day of Commemoraction, meaning commemoration and action, has taken place in different cities on African and European soil. A big Commemoraction has taken place in Oujda, Morocco, by Watch the Med - Alarmphone and the association "Pionniers Volontaires" from 6th  to 8th of February, with public conferences, exhibitions and artistic performances, testimonies of survivors, a sit-in at the Moroccan-Algerian border and a "Commemoration Caravan" to the city of Saidia, in commemoration of all the dead and missing at sea and on the land borders. 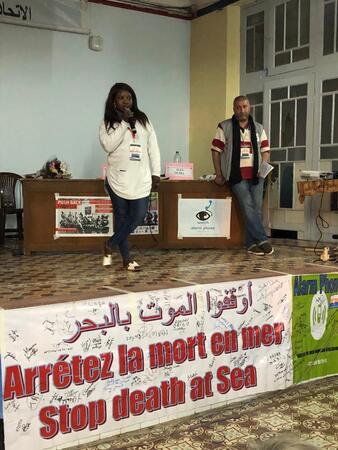 Commemoraction in Oujda, Morocco, on 6th of February 2020, with artworks by a Cameroonian artist Commemoraction in Oujda, Morocco. Sit in at the Algerian-Moroccan border on 8th of February 2020. On the beach of Saidia, Morocco, in commemoration of all the dead and missing at sea and on the land borders

Alarme Phone Sahara was part of Commemoraction with activities in Agadez in Niger, Bamako in Mali, Sokodé in Togo and in Edéa, Cameroon.

In Bamako, there was a press conference supported by testimonies of former migrants who had survived the horror in Libya and who had been driven back from Spanish waters to Morocco. There were also displaced Central Africans who fled from the crisis to Mali. The media releases also focused on the impact of the fight against terrorism on migration routes on the one hand and on the other hand on the aspects of violence in the management of migration between Africa and Europe, under the guise of aid and development cooperation in the migrants' countries of origin and in the midst of the political and security crisis in the Sahel. The Bamako Commemoraction was followed by various Malian media. Alarme Phone Sahara (APS) Mali activists also went to the Bamako Sogoniko bus station, a place of departure and passage for many people travelling in the West African sub-region, including also people on migration routes and migrants who have returned after being pushed back or deported. In this context, APS Mali is also launching an awareness-raising campaign at the bus station in Bamako to share information and experiences. 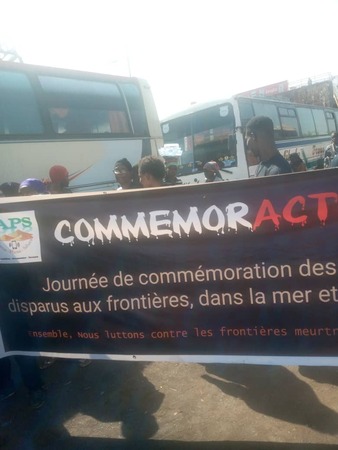 In Sokodé, there was a conference-debate with messages from the families of the disappeared - among others the families of the people from Sokodé who died in 2015 in the sea between Nigeria and Gabon, on their way to Gabon. In addition, there were testimonies by migrants who returned to Sokodé, Togo in November 2019.

Sokodé's declaration of 6th of February:

For a long time, we have been constantly confronted with death at Europe's external borders, at sea, in the desert or in detention camps to dissuade migrants from leaving in search of a better life for survival.

Thousands of other migrants have lost their lives in the desert, at sea or have disappeared.

Similarly, Togolese migrants, men, women and children, have died at sea bound for Gabon in 2015.

On this day of 6th of February 2020, we commemorate these deaths and fight for a just world where freedom of movement will finally and truly be a fundamental human right. We share the sorrow and pain of the relatives of the victims and we pray that our dear migrant friends rest in peace.

At this very moment when our commemoration is taking place in Sokodé, TOGO, many other people have gathered in Oujda, Morocco, Bamako, Mali, Niamey, Niger and Agadez, northern Niger to remember and exchange.

With our term COMMEMORACTION we will not forget all the migrants who lost their lives and we will continue to fight for the freedom of movement of all in our daily lives.

In Agadez, there was a conference-debate on the theme "Murderous Migration Policy. Whose responsibility is it and what measures should be taken? "with a film projection and exchanges and testimonies with migrants who are currently blocked in or have been sent back to Agadez. The memory of those who died on the migration route created very moving moments when participants shed tears. Impressions of commemoraction in Agadez

Speeches at commemoraction in Agadez by Ibrahim Manzo Diallo and others

Testimony by Awa Ouattara, migrant from Mali presently in Agadez

The activist Gabriel Bassand, a member of APS who has returned to Cameroon from Morocco, participated in the commemoration of the victims of Ceuta by bringing together young people from the city where he is to share his experiences with them. There were also CommemorActions in several cities in Europe, including Brighton, Marseille, Manchester, Zurich, Hamburg and Berlin.

In Berlin, there was a public event with rescue organisations in the Mediterranean, Watch the Med Alarmphone, Corasol, Borderline Europe and FFM ("Flight and Migration Research Society"): In Hamburg, there was a public event by Lampedusa Hamburg: