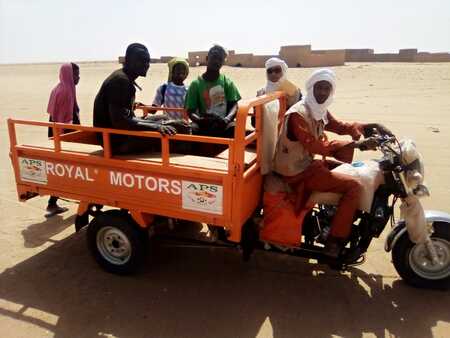 Hundreds of people deported in convoys from Algeria regularly arrive in Assamaka at the Algerian-Nigerian border. With the new tricycle vehicle, APS assists them in various situations:


Rescuing people left in the desert

People deported by Algerian forces in "unofficial" convoys, mostly not Nigeriens, but nationals of other countries, are always dropped off at "Point Zero" in the border area between Algeria and Niger, in the middle of the desert. People have to walk between 15 and 20 kilometres through the desert to reach Assamaka, the first Nigerien town after the Algerian border.

During this walk, some people get lost in the desert, especially when they arrive at night and lose their orientation. In addition, many deportees arrive injured and ill after being mistreated by Algerian security forces and after spending several days crossing the desert on the platform of a truck. The sick and injured, in particular, often no longer have the strength to walk from "Point Zero" to Assamaka.

The APS team in Assamaka has set itself the task of rescuing people with the tricycle vehicle who have been deported and who have got lost on the way from "Point Zero" to Assamaka or who have been left behind.

On site in Assamaka, the tricycle is also used to provide practical support to the deportees, including transporting injured and sick people to the local health sector as quickly and easily as possible.

The first use of the new vehicle took place on 29th of July 2022, when a group of deportees from an unofficial convoy arrived in Assamaka on foot. A man with head and leg injuries who was limping as a result of ill-treatment by Algerian security forces was taken from the local police station to the clinic. 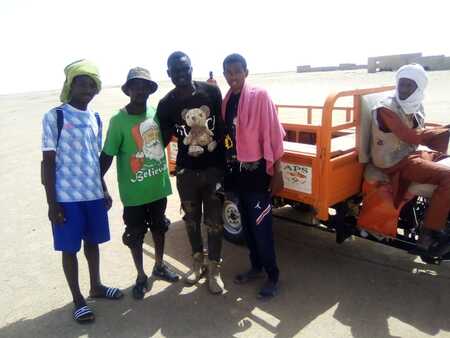 As it is feared that the Algerian state will continue its brutal practice of deportation, which is continuously encouraged by the European border regime, the Alarme Phone Sahara team stands ready in Assamaka to support the people concerned.


Cases of expulsions from Algeria to Niger in July 2022

With the latest deportations in July 2022, the number of people deported since the beginning of 2022 rises to at least 12358.

29th of July: Arrival of an unofficial deportation convoy

432 deportees in an unofficial expulsion convoy, including 8 underage girls, 5 women, 1 underage boy and 418 men, arrived in Assamaka on foot, after Algerian forces had dropped them off at Point Zero 15km from Assamaka.

The largest groups of deportees were 150 Guineans and 170 Malians. Among them were 20 nationals from Gabon, 3 from Chad, 10 from Sudan, 20 from Burkina Faso, 24 from Ivory Coast, 6 from Senegal, 13 from Cameroon, 8 from Benin, 3 from Nigeria, 2 from Sierra Leone, one person from Liberia, one from Mauritania and one from Ghana.

31st of July: Arrival of an official deportation convoy

The official deportation convoys take place on the basis of a deportation agreement between Algeria and Niger signed in 2014. The people deported in these convoys are generally citizens of Niger. Unlike the unofficial convoys, these people are taken directly to the town of Arlit by Algerian forces, where Nigerien forces take over to transport them to Agadez.

During the stopover in Assamaka, the Algerian forces give them a small food kit from a fridge truck which consists of a baguette of bread, 1.50 litres of water, a small box of juice and 3 pieces of cheese. Such quantities of food are pathetic for feeding people who are being forced to travel several hundred kilometres across the desert. To alleviate the situation of these deportees, the various associations, NGOs and structures active in Assamaka - "Protections des Enfants", "Karkara", UNHCR and also Alarme Phone Sahara - add food contributions to them. 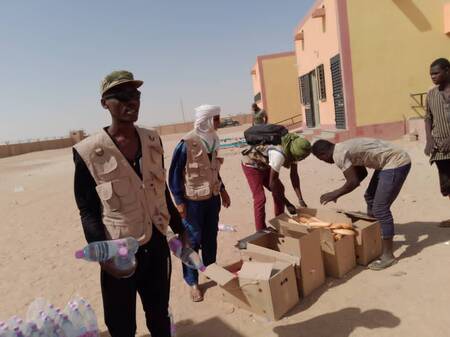 
Beyond the practical assistance measures, the objective of Alarme Phone Sahara remains the same:

To make a donation to Alarme Phone Sahara, click here