Since the end of September 2020, nationals from sub-Saharan countries living in Algeria have been subjected to a wave of large-scale persecution and deportation. 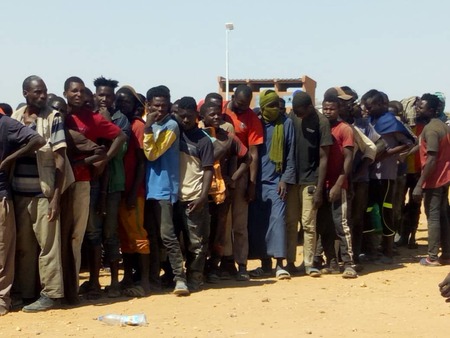 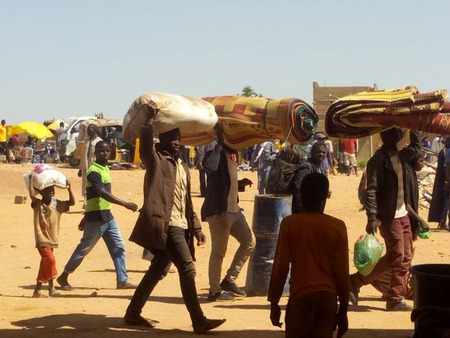 In recent weeks, human rights organisations, such as Human Rights Watch (HRW), have observed a rash of arrests of migrants in various cities in Algeria, including Oran, Tlemcen, Algiers, Blida, Boumerdès, Tipaza, Zeralda, Sétif and Annaba, where people have been caught in their homes, on the streets and in their workplaces. According to HRW, even unaccompanied children and children separated from their families during the raids - some under age 10 - have been detained and deported. And the UNHCR also confirmed the deportation of more than 80 asylum seekers officially registered at the UNHCR office in Algiers since end of September.

Migrants of several nationalities, part of a group of 270 people, deported from Algeria to Assamaka, Niger, on 30th of September 2020. © 2020 IOM Niger

The largest group among the people who were deported are at least 2974 nationals of Niger who had often earned their living in seasonal migration between Niger and Algeria. Usually it is they who are deported in the "official convoys" that take place on the base of the agreement that the two countries signed in 2014. In this kind of transport, Algerian law enforcement agencies are obliged to transport people to the border post at Assamaka to hand them over directly to the forces of Niger.

On the other hand, people deported in unofficial convoys are left in the border zone between Algeria and Niger in the middle of the desert and forced to walk 15 to 20 kilometres to the Assamaka border post. With this practice, the Algerian security forces put people's lives in danger, risking them getting lost in the desert. Already in 2018, the state of Niger had asked Algeria to put an end to these deportations of non-Nigerian nationals, but to no avail. The largest groups of deportees in unofficial convoys between 30th of September and 25th of October 2020 were, according to known figures, 1004 citizens from Mali and 708 from Guinea Conakry - two countries where situations of war, persecution and political and socio-economic crises push many people, especially young ones, on the roads of flight and migration. Apart from them, there were nationals of many sub-Saharan African countries in the ranks of the people who were deported: People from Icory Coast, Senegal, Sierra Leone, Liberia, Togo, Ghana, Benin, the Gambia, Chad, Sudan, Congo Kinshasa (DRC), Congo Brazzaville, Nigeria, Mauritania, Burkina Faso, Cameroon, Guinea Bissau, Somalia and Central Africa.

Most of the people deported from Algeria to Niger end up in IOM camps in Agadez, where many of them remain stranded if there is neither the possibility to return to their regions or countries of origin, nor the possibility to continue their migration journey.

Theft and violence against people deported

People who were deported have reported serious acts of abuse and theft by Algerian security forces: They all report that police or gendarmes have taken their money and personal belongings, that they have been beaten and injured and that they have observed acts of abuse and rape, especially against the women deported. Some even speak of people being killed.

"We were hit, they took our phones, the money we have, they took everything," said Badra Aliou, a Malian citizen deported from Algeria in an interview with the Alarme Phone Sahara team in Agadez on 18th of October.

A Ghanaian man, also in Agadez after his deportation, who wants to remain anonymous, relates on 24th of October:

"I went to Algeria to work, but Algeria is very bad, because of the way they maltreated people, they maltreated us like animals. Even the females: They treat them like slaves! Searching them, doing any act with them, because they want to deport. And if they want to deport, they don't follow the normal rules. They will just beat up someone. Killings. If you fail to listen to them in a normal way, they'll kill you. They break your leg, they take all the money that is with you. They take your girl (...), act sexual tackles with them. They do anything they like. Collect all your property, your phone, everything."

And another Ghanaian man, also anonymous, on the same day:

"(...) The biggest problem I know is for women. The women (...), they will just get them together to sleep with three people, seven people, just like that. And they beat her, so that she has to do it. (...) The Algerian police, the gendarmes, (...) they are all the same. When they just hold you, they start beating you, slapping you, to find out where you have money, where you don't have money, they start beating you."

For years there had been several phases of mass deportations from Algeria to Niger and Mali. The current wave of raids, arrests and deportations is a direct result of the "migration reform" and the creation of an inter-ministerial commission to fight "irregular migration", announced by Algerian Interior Minister Kamel Beldjoud at a plenary session of parliament on 30th of September.

The "complementary measures" announced by the minister include joint police and gendarmerie roadblocks on border roads, the demolition of "anarchic dwellings" housing migrants, such as sheds or construction sites, the dismantling of migrant reception networks and the automatic confiscation of means of transport.

On the one hand, this kind of declaration of war against migrants in Algeria follows the Algerian authorities' interest in reducing the number of migrants and satisfying racism within the indigenous society. On the other hand, it is an opportunity for them to position themselves as guardians for the border regime of the European Union states. Although the Algerian state has so far refused to sign an official migration agreement with EU countries, its ruthless deportation policy will serve as an asset in the upcoming negotiations with European states on credits and economic cooperation in the face of the deep economic crisis.

In addition, cooperation already exists in the form of the delivery of large quantities of military and security goods for the Algerian army, police and gendarmerie, such as surveillance technology or Mercedes-Benz vehicles.

In the face of this ongoing drama:

Media reports on deportations from Algeria to Niger:

"Algeria abandons thousands of migrants in the desert" - on Qantara.de