Mokamit lives in Niamey, the capital of Niger. He is an IT specialist and responsible for public relations of Alarme Phone Sahara.

The number of Covid-19 infection cases is rising as the days go by, soon to become the champion of the sub-region in view of the speed of the spread of the disease. Niger registered its first case on 19th of March and by 9th of April there are 342 confirmed cases including 11 deaths and 28 persons cured. So what is the real capacity of the state to manage this crisis, even if we already know that the health system is precarious?

An already landlocked country that has had its borders closed since 18th of March and then decides on the 21st on a curfew from 7pm to 7am is seriously endangering the already fragile economy.  There had been a delay in taking decisions to tackle the health crisis in Africa in general and in Niger in particular, where the initial decisions seem to serve political ends more than anything else, to see that measures forbidding to gather more than 50 people were used to prevent a civil society demonstration before confirming the presence of the virus in the country, while paradoxically a journalist who had raised the alarm and informed of the presence of a suspect case was imprisoned and then released once the information turned out to be true. So in the face of all this, it becomes clear that the lack of credibility and the severity of the authorities' stance on the subject does not help the situation. From now on, journalism becomes a relay of official information, which normally has to play its role by asking important questions that create knowledge and that would allow people to fully enjoy their right to information on all the questions they ask themselves without letting them panic by sharing true or "fake" news. For example, it is important to ask, what is the protocol for managing suspected cases of Covid-19, if camps for migrants and refugees/displaced persons and prisons have special monitoring and care mechanisms, or the actual capacity of the government to manage this crisis. 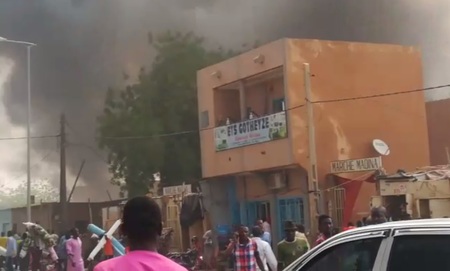 15th of March 2020: A civil society demonstration against corruption, impunity and bad governance is dispersed by the police shooting teargas. Fire breaks out in a nearby market area, killing several persons.

The Nigerien government in its response to the pandemic has a plan to support vulnerable people. It has also decreed to pardon 1540 prisoners, for humanitarian reasons and to relieve congestion in prisons, including the release of the opposition leader Hama Amadou. However, the case of the 6 civil society actors who are arbitrarily placed in preventive detention in various prisons in Niger remains unresolved. Most of these prisons are located in a high-risk area already in a state of security emergency. In addition, in order to dramatize the issue of the "Corona virus", the Ministry of Justice has automatically issued a communiqué to prevent any visit to the detainees for a period of three months. A decision that seems to be consciously taken to cut off all relations with these actors because it is the only measure against the spread of the Corona virus that lasts up to 3 months from the outset, while all others are for a maximum of two weeks renewable depending on the evolution of the situation.

In the blink of an eye the situation of this crisis comes to feed all the debates by silencing such important subjects as the misappropriation of funds from the Ministry of Defence, impunity, the separation of powers claimed by magistrates and lawyers through a "day without justice" and the security situation in the country which today we do not know what turn it takes and what ground it is gaining. For the world can and will certainly win the fight against this health crisis, but the Sahel in general and Niger in particular will have to to face other existing crises afterwards, which will no doubt have taken advantage of the Covid-19 to grow as well.

Moreover, the average Nigerien also indulges in the 'conspiracy' theories on disease that Africans in general give themselves over to and which often prove to be well-founded. Even if it is true that this does not help the concentration on the fight against this planetary crisis. But it is worrying when researchers from major European institutions (Inserm), on international channels, chauvinistly propose to make Africa a testing ground without consulting those concerned. And moreover, the inequalities in accountability and management of world affairs in all major issues and even that of a crisis like this, which knows no borders, spares neither rich nor poor, neither black nor white. So, where we would have to consider all the states on an equal level, the management of the crisis is done without really consulting Africans and worse, Africa is infantilized, considered as eternally in nees of assistance, because the "paternal" are lining up to see how to "help" Africa instead of talking about international solidarity.

Faced with this, no one can do without meditating on the saying "everything that is done for me, without me, is against me".

Posted on Apr 11 | Tagged Corona, repression, répression, and Niger | visited: 3977
Posts
Latest news Analyses & statements Activities of APS
Latest posts
2022-12-04 Niger end 2022: Humanitarian emergency in the face of mass deportations and inaccessibility to IOM services (News) 2022-10-21 October 2022: Deportations from Algeria to Niger continue - assistance to deportees by Alarme Phone Sahara's tricycle (Activity, News) 2022-09-19 More mass deportations from Algeria to Niger in August and September 2022 (News) 2022-09-19 "It's too hard, we want to go back": Senegalese in Niger denounce the difficult wait for their repatriation (Statements, News) 2022-09-22 Niger: Senegalese migrants take to the streets to march from Agadez to Niamey and demand their return to Senegal (News) 2022-08-28 Niger: Protests of migrants in IOM camps in Agadez and Arlit (News) 2022-08-27 IOM in Niger: Criticism of serious shortcomings in the care of people stranded in Niger (News, Statements)