The beneficiaries of the Collective Kitchen are mostly people who cannot or do not want to stay at IOM and UNHCR facilities and have found shelter in private households and so-called migrant ghettos of Agadez. In this context, it should be noted that accommodation and care by the IOM is always conditional on the disclosure of personal data on origin and identity and on cooperation in a so-called "voluntary return". In contrast, Alarme Phone Sahara advocates for the right to freedom of movement and refuses to link support for people in distress to so-called "voluntary return".

The sudden arrival of the corona virus pandemic at the end of 2019 has changed many things around the world. The Covid-19 has led to the tightening of the policy of border externalisation initiated by the European Union. Its consequences have extended far beyond the borders of the EU and are felt with great pressure in African countries such as Morocco, Tunisia, Algeria and Niger which can be classified as model students in the unconditional application of decisions tending to control the arrival of migrants on European soil. Without remorse, the right to free movement enshrined in Article 13 of the Universal Declaration of Human Rights is denied to individuals. Measures that are more draconian than health measures have made the city of Agadez (Niger) a place of retreat and a place for migrants of various nationalities to take this evil patiently. Algeria has become an expert in adopting a cruel attitude towards people of West African origin as evidenced by the appalling numbers of deportations and pushbacks recorded in 2020 (HRW report of 2020). 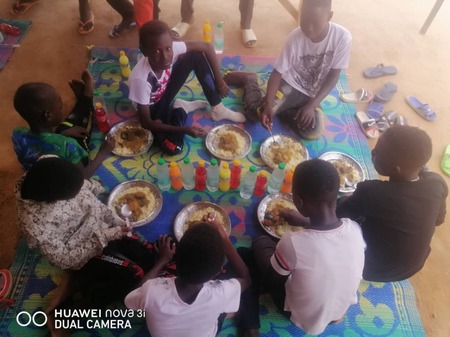 Why collective kitchens?
As Alarme Phone Sahara (APS) cannot remain insensitive to such atrocities experienced by migrants who can neither advance nor retreat on their move due to the closure of borders and the disproportionate increase of patrols on land and in the air, the idea of offering weekly collective kitchens was born. Organizations opposed to anti-migration policy support the idea and accompany Alarme Phone Sahara (APS). This means that since the 4th of July 2020, the idea of the kitchen has become a reality in the sense of assistance to migrants who are blocked and without resources. A total of 30 kitchens, 2 of which were special kitchens, have been organized by the end of 2020. The special kitchens were organized on the occasion of the religious holidays of Tabaski and Christmas 2020.

A total of 930 beneficiaries during 6 months of experience
With each time 30 beneficiaries from the various nationality groups, the 28 collective kitchens reached 840 people of all ages. This number is to be considered carefully. The popularity of the activity means that people arrive at the place where the meal is shared without being officially invited. The organization manages the surplus as best as it can to avoid increasing the disappointment of the poor. As for the special collective kitchens, they reached a total of 90 people with the particularity of having registered the presence of 17 orphans living in a church in the square called "House of Blessing" run by Pastor Dan Juma Bawa.

Not only 930, but more than 1000 beneficiaries of collective kitchens in 2020
Men, women, children (migrants and orphans) have witnessed the multiple benefits of the collective kitchen run by APS with the unselfish support of its partners. Saturdays have not gone unnoticed since the last 6 months of last year. The echoes go beyond the limits of the migrants' homes and resound everywhere so that the number of 30 guests is not met to the letter. This means that the favors of this event are grandiose, hence the continuity of the action is discussed lively.

The year 2020 extinguishes its lanterns at the same time as those of 2021 are lit
At the beginning of the new year 2021, the diverse team of APS takes this opportunity to wish on its behalf a very happy new year to its members, partners, people on the move and the whole world. May this new year be a year of hope for oppressed people and a year of positive renewal for world leaders to make decisions that respect human rights around the world.
Alarme Phone Sahara (APS) Coordination in Agadez

Or donate via PayPal: https://alarmephonesahara.info/en/donate

Posted on Jan 09 | Tagged Cuisine Collective, Collective Kitchen, Agadez, and Niger | visited: 3792
Posts
Latest news Analyses & statements Activities of APS
Latest posts
2022-12-04 Niger end 2022: Humanitarian emergency in the face of mass deportations and inaccessibility to IOM services (News) 2022-10-21 October 2022: Deportations from Algeria to Niger continue - assistance to deportees by Alarme Phone Sahara's tricycle (Activity, News) 2022-09-19 More mass deportations from Algeria to Niger in August and September 2022 (News) 2022-09-19 "It's too hard, we want to go back": Senegalese in Niger denounce the difficult wait for their repatriation (Statements, News) 2022-09-22 Niger: Senegalese migrants take to the streets to march from Agadez to Niamey and demand their return to Senegal (News) 2022-08-28 Niger: Protests of migrants in IOM camps in Agadez and Arlit (News) 2022-08-27 IOM in Niger: Criticism of serious shortcomings in the care of people stranded in Niger (News, Statements)