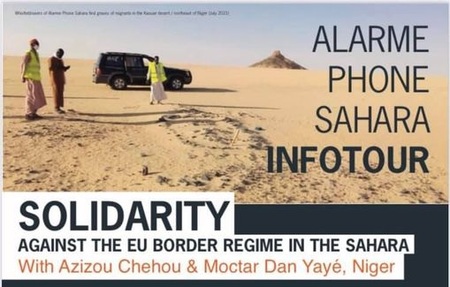 Solidarity against the EU border regime in the Sahara

The borders that European states erect against migrants and refugees are no longer limited to the EU's external borders, but extend far beyond, including across many countries on the African continent. This repressive border regime creates life-threatening conditions and leaves people to die not only in the Mediterranean and the Atlantic, but also on the travel routes through the Sahel countries and North Africa. It leads to brutal mass deportations between African countries and the internment of migrants and refugees in torture camps in Libya. It also means that thousands of people who have no way forward are stranded empty-handed and in precarious conditions in countries like Niger, one of the poorest countries in the world. Circular migration, which has historically existed, particularly in and between West and North Africa, is thus increasingly restricted. As a result, this EU-imposed policy in the colonial tradition is destroying the economic livelihoods and thus the lives of the inhabitants of various regions in many places.

Alarme Phone Sahara (APS) is practicing solidary intervention against this brutal EU border regime in Agadez and other places in northern Niger. During their information tour, Moctar Dan Yayé and Azizou Chehou from APS Niger will talk about the current context and developments in Niger regarding the repressive migration policy and their daily work.

They will address, among others, the following topics:

● "Emergency rescue in the desert" by natives of the Bilma region active with APS & search for missing persons in the Sahara en route to Libya,

● Documentation of the increasing mass deportations from Algeria & solidarity work on site in Assamaka,

● collective kitchen for refugees and migrants in Agadez

● Complaint to the Court of Justice of the West African Union against the law "2015 -036", pushed by the EU, which criminalizes regional migration,

Public hearing with Alarme Phone Sahara and Alarmphone Watch the Med in the context of the permanent protest against the G7 summit in Elmau near Garmisch.

Location: Müritz Airpark, Lärz
Workshop with Alarme Phone Sahara and Matthias Monroy on Frontex and the border regime in North and West Africa

Location: aka, Werner-Hilpert-Straße 22 (WH22), Kassel
Event with Alarme Phone Sahara and Migration Control on the outsourcing of the border regime.

Place: Kassel, aka, Werner-Hilpert-Straße 22 (WH22)
Alarme Phone Sahara talks about transnational collective struggles for change in the context of Documenta 15.

Event at the climate camp / resistance summer camp.
Alarme Phone Sahara talks about the struggles for freedom of movement, food sovereignty and climate justice in the context of the current situation in Niger.

Posted on Jun 27 | Tagged Infotour, tour d'information, and Alarme Phone Sahara | visited: 1329
Posts
Latest news Analyses & statements Activities of APS
Latest posts
2022-12-04 Niger end 2022: Humanitarian emergency in the face of mass deportations and inaccessibility to IOM services (News) 2022-10-21 October 2022: Deportations from Algeria to Niger continue - assistance to deportees by Alarme Phone Sahara's tricycle (Activity, News) 2022-09-19 More mass deportations from Algeria to Niger in August and September 2022 (News) 2022-09-19 "It's too hard, we want to go back": Senegalese in Niger denounce the difficult wait for their repatriation (Statements, News) 2022-09-22 Niger: Senegalese migrants take to the streets to march from Agadez to Niamey and demand their return to Senegal (News) 2022-08-28 Niger: Protests of migrants in IOM camps in Agadez and Arlit (News) 2022-08-27 IOM in Niger: Criticism of serious shortcomings in the care of people stranded in Niger (News, Statements)