Deportation to Assamakka on 17th of June 2019

The people were dropped off 30 km from Assamakka after being returned from Algeria. Among them, there were 5 Ivorian women and a baby at an estimated age of 4 to 6 months. One woman testified that she was dispossessed of all her property - a kind of act usually perpetrated by Algerian law enforcement during the deportations.

A deported Ivorian man told how he arrived in Assamakka with a group of 31 people. He was deported from Algeria after spending more than a year in prison with many people of various nationalities. When they arrived in the border area, they were left to their own devices without water, food or money. The witness said that some were shot in the legs and fell along the way. He talked about approximately 170 people left in the desert in danger of losing their lives. Until now, it is not yet clear whether these people were finally saved.

Another witness of Niger nationality, called Alhassane, pointed out that inhuman treatment is a daily occurrence on Algerian soil.

A Woman found in the desert 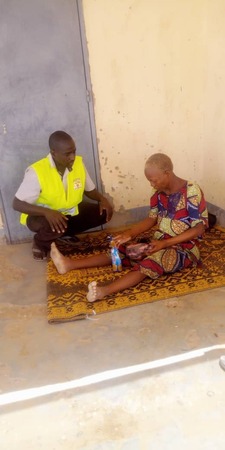 Among those who were returned on June 17, 2019, there was a Nigerian woman found alive at an estimated distance of 100 km from Assamakka in the desert and taken to Assamakka. According to Mohamed Souleymane, Alert Launcher in Assamakka, her physical condition was deteriorating and also her psychological state was affected. The Alert Launcher assisted her in stabilizing her health by taking her to the health centre every day.

According to the testimony of Mohamed Souleymane, Alert Launcher from Assamakka who was on the spot with members of the security forces, 4 dead bodies were found about 50 km from the village of Assamakka. Apparently, the victims had walked a long distance because they had left all their luggage before succumbing and losing their lives exhausted in the big heat.

It was impossible to provide any further information on the identity of these persons and their origins. As the dead bodies could not be transported, they were buried on the spot.

It is a sad and condemnable reality that the situation in the desert between Algeria and Niger continues to increase the number of its victims.

Call for assistance for humanitarian support work in Assamakka

Mohamed Souleymane, Alarme Phone Sahara Alert Launcher in Assamaka, calls for support for humanitarian assistance for people who have been deported to Assamakka. He says that assisting in frequent emergencies requires fuel to move, water and other basic necessities for exhausted people.

In addition, it is a challenge that exceeds his own capacity to help deported people in mental crisis, who may sometimes walk back to the desert and get lost, being in a disoriented state.

Apart from that, he mentions, like the Kaouar Valley Alert Launchers in the Tenéré desert, a GPS localization training course to be able to carry out rescue missions in the desert.

To make a donation for the work of Alarme Phone Sahara:

Posted on Jul 28 | Tagged Assamakka, refoulement, deportation, algeria, algérie, Niger, frontière, border, cas de décès, and cases of death | visited: 5614
Posts
Latest news Analyses & statements Activities of APS
Latest posts
2022-12-04 Niger end 2022: Humanitarian emergency in the face of mass deportations and inaccessibility to IOM services (News) 2022-10-21 October 2022: Deportations from Algeria to Niger continue - assistance to deportees by Alarme Phone Sahara's tricycle (Activity, News) 2022-09-19 More mass deportations from Algeria to Niger in August and September 2022 (News) 2022-09-19 "It's too hard, we want to go back": Senegalese in Niger denounce the difficult wait for their repatriation (Statements, News) 2022-09-22 Niger: Senegalese migrants take to the streets to march from Agadez to Niamey and demand their return to Senegal (News) 2022-08-28 Niger: Protests of migrants in IOM camps in Agadez and Arlit (News) 2022-08-27 IOM in Niger: Criticism of serious shortcomings in the care of people stranded in Niger (News, Statements)