It is the end of July 2021. To talk about a civilian patrol mission in the middle of the desert might seem superfluous, even utopian to many people because of the mysteries of this geographical space. Yet it is a reality. From 27th to 29th of July 2021, a team of Alarme Phone Sahara dared this adventure in a limited area of the Niger desert. They gambled and succeeded, and the results are revealing enough.

How do civilians manage to patrol an area frequented by all kinds of users?

The simple crew consists of a vehicle adapted to the terrain, humanitarian volunteers
the transnational network's identification waistcoats, ordinary telephones, a supply of water and food, a small pharmaceutical box and a satellite telephone. This is the arsenal of the mission launched on the roads of all dangers with the primary ambition of raising awareness, document and rescue. All of this is motivated by the courage and motivation to share the daily experience of other civilians who create new routes to bypass the repressive anti-migration machine engaged by lobbies of the Global North at unimaginable costs.

There is no unhealthy motive behind this civil action except that of humanitarian assistance. The testing ground for this original expedition is the Kawar area in the northeastern state of Niger, a sub-Saharan country considered the heart of the African continent. It is also the country that serves as a rear base for the European Union to accomplish its goal of tracking the free movement of people. This strategic position of outsourcing Europe's borders is supported by an intelligentsia that is the political thinking wing of the infamous Frontex. This organisation acts as a backbone to the national defence and security forces. It provides training for men in uniform and enhances the skills of the staff of civil administrations (territorial surveillance and justice). It would be naïve to imagine a structure that plans to build and maintain its own army with a strength of more than 10,000 men in the relatively near future would not enjoy the complicity of backers lurking in the shadows and hatching Machiavellian plans. Faced with such an armada, a civilian patrol of 3 to 4 elements puts any idea of comparison to shame. Despite this unequivocal superiority, the civilian patrol completes its mission with deserved results.


Awareness-raising sessions in the localities crossed

The villages and towns of Dirkou, Lataï, Siguidine and Anèye bear witness to the need for travellers to be aware of the challenges they face when crossing the desert. Indigenous and migrant communities have been given the message to prevent risks. The positions of whistleblowers have been outlined and distress numbers for desert travel are shared. The call for solidarity and mutual aid was disseminated to show the various participants that human life is sacred. Consequently, everyone has a vital role to play in saving lives. The fewer risks taken, the greater the chance of arriving safely. The awareness-raising sessions end by committing each participant to be an actor in assisting people in danger or distress in this ocean of sand overhung by shifting dunes that bury victims and cargoes like waves that overturn ships and boats in the sea.


Grave discoveries by the APS patrol 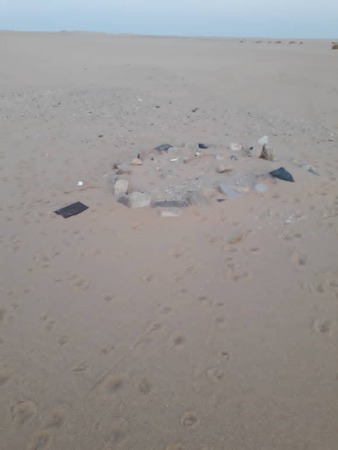 Silent testimonies of the deadly migration regime: Last resting places of migrants who lost their lives in the Niger desert

During the hike on the new tracks created following the overzealous application of Niger's law 2015-36, the mission witnessed discoveries that give you goose bumps. These are makeshift graves dug along the roads to contain the bodies of travellers (women and men). On three different sites, the bodies of travellers lie unidentified. This is an opportunity to think of the parents and relatives of these anonymous people who continue to hope for a reunion that will never materialise on this planet earth.

A total of 19 graves are listed on the dangerous roads used by lone transporters. Questions about who is responsible for such acts are part of the logic of all those who want to see justice established in this generalized geopolitical context where only the law of the jungle is the master word. In spite of all the disaster suffered by the human race, candidates in search of a worldly El Dorado do not resist this temptation.


Traffic accidents on routes where traffic regulations are ignored

On the way back after 3 days of experience, the mission was approached in the vicinity of Lataï by a driver carrying two (02) injured people following an accident of another vehicle with 33 passengers on board.

The patrol mission changes its focus to medical assistance. It collected the injured and transported them to the Anèye medical centre, where the person in charge referred the most serious case to Dirkou, a more developed locality in terms of reception facilities and public services. 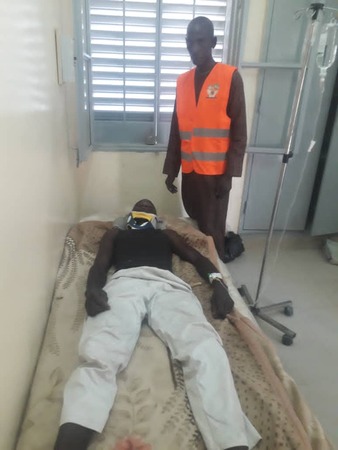 It was there that the patient was offered intensive care. The latest reports mention the transfer of the patient to the regional hospital in Agadez. The whistleblowers in their humanitarian skins remained at the patient's bedside until the ambulance left Dirkou for the historic city of Agadez.

Following an exchange by telephone, the mission decided to entrust a rescue mission for the 33 passengers who remained by the "Puits d'Espoir" (Well of Hope). A partner, Médecins Sans Frontières, present in Dirkou, wanted to contribute to this humanitarian mission with 200 litres of fuel.

The rescue mission on board two all-terrain vehicles left Dirkou on Friday 30th of July in the direction of the place where the 33 uninjured people and the damaged vehicle are located. 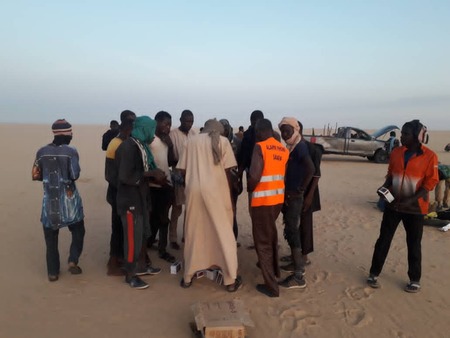 near "Puits d'Espoir" (Well of Hope)

It was around 9.30 pm (Niger time) that the mission communicated by satellite that it had found the 33 passengers safe and sound. After a dinner break, the 33 passengers, all of Nigerien nationality, boarded the pick-up vehicle and were driven to the village of Lataï, which is the closest place to the accident site.


Sad discovery of a dead migrant

Along the way the rescue mission made a painful discovery. It found the body of a migrant in his thirties, who had died some four days earlier, according to the external signs on the body. The victim had a mobile phone next to him. The first reflex was to proceed with the burial of the body at the place of discovery after having noted its deterioration.

Once this was done, the mission continued its journey, keeping the phone with it to facilitate searches by members of the deceased's family, who had no documents on him.

One of the two vehicles of the mission took the direction of Dirkou to arrive in the morning of Saturday 31st of July. Before reporting back to the military and civilian authorities in the area, the mission members asked to find the last communication numbers of the deceased before the end of the tragedy.

Among the 3 contacts found, Alarme Phone Sahara members were able to contact one of the sisters of the deceased who lives in Nigeria and goes by the name of "UCHE". It is she who informed Alarme Phone Sahara that the deceased was called "OCHOCHUKWU". The APS team gave her the sad news after many tricks. Afterwards the sister received the pictures of the body of the deceased taken at the place of discovery. She confirms that it is indeed her brother despite the deterioration of the body due to the weather. The APS team took the opportunity to introduce her to the APS organisation and the work it does, before offering her the condolences of the whole group. This proves how often the migration routes through the desert are deadly. Add to this the anti-migration policies of outsourcing borders, and the end of July 2021 is another reminder that the suffering of migrants is far from over. But as long as there is support from organisations more affluent than APS, it is not superfluous to say that it is still possible for APS to brave the challenges of the desert to go to the rescue of human lives that might be in distress.


For a trial run, it was a big achievement!

Thanks to the support of its partners, the Alarme Phone Sahara network dared to take the gamble. In view of the results achieved with modest means, APS is delighted to have won such a bet, which could ultimately show that in order to be useful to one's fellow person, willpower and determination are the first obstacles to be overcome. By favouring solidarity, the achievement of any goal remains within reach, even if detractors may litter the path with pitfalls. This is the place to take our hats off to the partners who have believed in our abilities and decided to provide us with their multi-faceted support.

The first civilian patrol mission in the desert has accomplished its mission in the best possible ways, which allows us to say: There is no such thing as one without two.

For people not using PayPal you can donate via bank transfer to Afrique Europe Interact: