Morocco: pushbacks of Sub-Saharan people to the border with Algeria have resumed since November 2019

According to reports, in the week before 22nd of November, the Moroccan authorities again carried out raids on migrant camps in Nador, proceeding to forced displacement of a group of 90 Sub-Saharans to the border with Algeria. 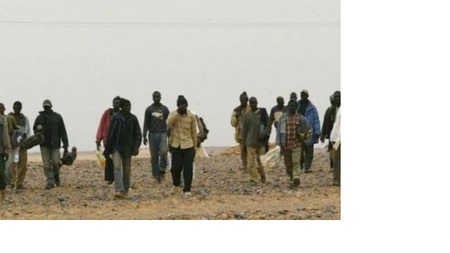 An action that is outrageous to associations and human rights activists, including AMDH (Moroccan Human Rights Association) and GADEM (Antiracist  Group to accompany and defend Foreigners and Migrants).

In solidarity with the associations in Morocco, Alarme Phone Sahara also calls for an immediate end to raids against migrants in Morocco and pushbacks to the country's borders and desert areas.

Alarme Phone Sahara denounces the hunt for migrants in Morocco and other countries of the Maghreb sub-region, which is taking place in the context of the outsourcing of the European border regime and the migration deals between EU countries and African governments.

Posted on Dec 08 | Tagged morocco, maroc, pushbacks, refoulements, Nador, Oujda, and Jerada | visited: 5682
Posts
Latest news Analyses & statements Activities of APS
Latest posts
2022-12-04 Niger end 2022: Humanitarian emergency in the face of mass deportations and inaccessibility to IOM services (News) 2022-10-21 October 2022: Deportations from Algeria to Niger continue - assistance to deportees by Alarme Phone Sahara's tricycle (Activity, News) 2022-09-19 More mass deportations from Algeria to Niger in August and September 2022 (News) 2022-09-19 "It's too hard, we want to go back": Senegalese in Niger denounce the difficult wait for their repatriation (Statements, News) 2022-09-22 Niger: Senegalese migrants take to the streets to march from Agadez to Niamey and demand their return to Senegal (News) 2022-08-28 Niger: Protests of migrants in IOM camps in Agadez and Arlit (News) 2022-08-27 IOM in Niger: Criticism of serious shortcomings in the care of people stranded in Niger (News, Statements)