Posted on Feb 09 | visited: 2894
Desolation, sadness and mourning due to the crossing of the desert

February 2021 will remain for a long time a period of bitter memories in terms of the free movement of people. The Agadez-Libyan border migration route has just plunged migrants into a state of great sadness and desolation. This reminds the defenders of "Frontex" of the harshness of their decision. In addition to the disappearances and deaths of dozens of human lives, there is mourning in this month of heavy toll.

Posted on Jan 06 | visited: 2687
Migrants and Christian Orphans Together on Christmas Eve 2020 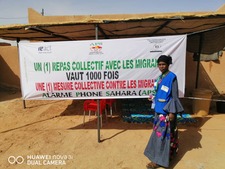 Posted on Aug 06 | visited: 4017
« 1 2 3 »
Posts
Latest news Analyses & statements Activities of APS
Latest posts
2022-10-21 October 2022: Deportations from Algeria to Niger continue - assistance to deportees by Alarme Phone Sahara's tricycle (Activity, News) 2022-09-19 More mass deportations from Algeria to Niger in August and September 2022 (News) 2022-09-19 "It's too hard, we want to go back": Senegalese in Niger denounce the difficult wait for their repatriation (News, Statements) 2022-09-22 Niger: Senegalese migrants take to the streets to march from Agadez to Niamey and demand their return to Senegal (News) 2022-08-28 Niger: Protests of migrants in IOM camps in Agadez and Arlit (News) 2022-08-27 IOM in Niger: Criticism of serious shortcomings in the care of people stranded in Niger (Statements, News) 2022-08-23 Solidarity video for Sierra Leonean refugee protest camp in Munich (Statements, Activity)