Algeria, a northern border country, has for years been deporting large numbers of mostly West African citizens to Assamaka village.

Posted on Jan 07 | visited: 1363
Statements by visitors of the Collective Kitchen in Agadez

Visitors of the Collective Kitchen, among them one music artist, share their views:

Posted on Jan 07 | visited: 2766
The hidden face of migration in the life of Roukayat Olalere

Originally from Nigeria, Roukayat is about 30 years old. She has lived outside her native country, settling in Tripoli (capital of Libya) since 2018, working as a housekeeper in an indigenous family. Her situation began to worry her about 8 months ago, she explains. Fallen ill and without assistance, she decided to return home. She arrived on September 04, 2020 in Agadez, Niger where Alarme Phone Sahara (APS) received the alert on the case of this young lady whose future is rocking between life and death and left to herself in a bus station.
On September 08, 2020, a Nigerian national came to the APS office to inform about the case of Roukayat who would be in a bus station in the area and suffering from general fatigue, cough and nausea. Having been prosecuted and arrested in the past with a sentence of 12 months in prison, the informant did not want to take the risk of dealing with Roukayat's case personally to avoid falling into the trap of the intelligence services that enforce Law 036-2015 in force since 2016 in Niger. However, his duty to assist prompted him to turn to APS. The APS team went to the station mentioned above in the company of the informant for translation in case the woman had communication barriers. 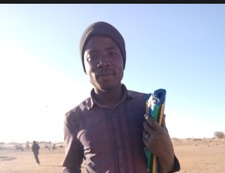 Posted on Apr 29 | visited: 7979
« 1 2 3 4 »
Posts
Latest news Analyses & statements Activities of APS
Latest posts
2022-09-19 "It's too hard, we want to go back": Senegalese in Niger denounce the difficult wait for their repatriation (News, Statements) 2022-08-27 IOM in Niger: Criticism of serious shortcomings in the care of people stranded in Niger (Statements, News) 2022-08-23 Solidarity video for Sierra Leonean refugee protest camp in Munich (Statements, Activity) 2022-05-22 21 MAY: TRANSNATIONAL DAY OF STRUGGLE AGAINST DEPORTATIONS (Statements) 2021-10-26 The three borders of the Sahel (Statements) 2021-10-07 Refugees in Libya: Urgent letter to African Union after brutal raids and killings (News, Statements) 2021-08-06 The criminalisation of mobility and the rhetoric of defending migrants: the Niger experiment (Statements)